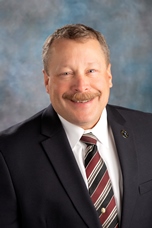 Division Administrator Brad Johnson grew up in Boise, Idaho. He attended the University of Idaho in Moscow, Idaho and during those four years obtained experience interning as a Deputy Sheriff, working as a District Court Marshal, and spent over three years as a reserve police officer, eventually obtaining the rank of Captain and commanding the 10 member Reserve Unit of the Moscow Police Department. In 1983, he graduated with a Bachelor of Science degree in Psychology and was commissioned a Second Lieutenant in the Regular Army as a Distinguished Military Graduate and scholarship student in ROTC.

During the next decade, Administrator Johnson served on active duty at various locations in Germany, Alabama and Colorado, eventually landing at Fort Wainwright, AK as the Deputy Provost Marshal for the 6th Infantry Division (Light). At this mid-point in his career, he decided to leave active duty and return to civilian law enforcement to pursue a career.

He was hired by the Fairbanks Police Department in 1993 as a patrol officer. Later that year, he was selected for duty with the department’s SWAT Team and was promoted to Sergeant in 1995. During the next ten years, Administrator Johnson performed varying duties including field training officer, patrol supervisor, administrative sergeant, and department IT Manager. He was an operator with the department SWAT Team for 12 years, concluding as the operations sergeant/deputy commander. In March 2005 he was promoted to Lieutenant and assigned as the Deputy Chief of Police; the position he held until retiring in 2018.